Halloween and A Commitment Problem

I have been overwhelmed the last few days. Lots of work projects came rolling in the last two weeks, and I had already started a few personal projects (with deadlines) in what had been the slow period previous to that. Unfortunately, this has meant a slow down in my posts, especially the commenter-inspired ones. But I will be getting back to those soon because they are a whole lot of fun; they’ll probably just be sprinkled throughout the regular posts. (Though I am having a bit of trouble with the “real women of genius” one (sorry Fuzz); I think it’s because I have been so busy all I can think of in terms of “genius” and “women” would be the robot slaves that would clean the entire house for me, not just the floors. That would be sweet!)

Some of the personal projects have been Halloween oriented, such as making Chance’s costume… (He’s a robot.) 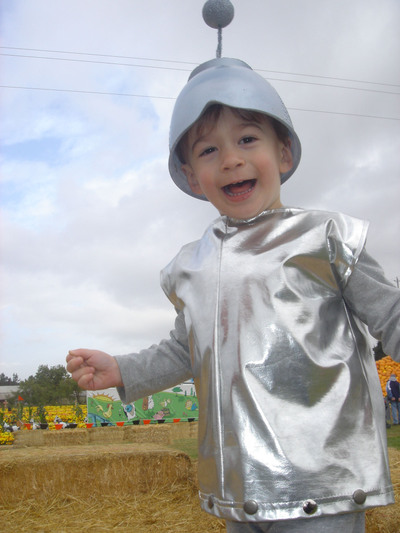 We had a Halloween function at a pumpkin patch this morning that I was trying to get his costume ready for in time. 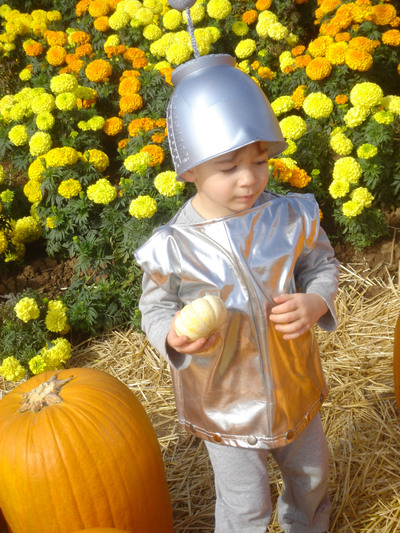 Yes, that is Tupperware on his head. People actually asked me if the hat "came" with the costume when I ordered it.  Does anyone besides me remember when almost ALL costumes were cobbled together from stuff you found around the house? 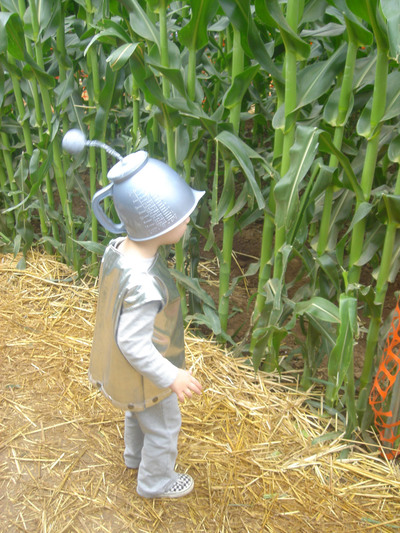 And I‘ve been planning out decorations for Halloween night. I’ve got this big picture window now in the front of our house, plus half a porch. I’m thinking a scene in the sunroom with a skeleton (though not too scary) with a graveyard fronting that picture window on the front lawn. Then on the other side of the lawn, (fronting the porch), doing a pumpkin patch kind of scene with scarecrows and whatnot. This way it covers both Keen and my sensibilities… I like the spookier elements of Halloween and Keen likes more of the cute stuff. I’d go all out scary except I don’t want to traumatize my kid and I figure Chance will be plenty into the blood and gore aspect as he gets older – no need to push it now. We’ll top everything off with cheery string lights and a dry ice fog.

Yes, I am a Halloween nerd.

The Halloween decorations shouldn’t be all that high of a priority on my unending list of ToDos, except that they start pulling Halloween stuff off the shelves about this time of the month… to make way for all the Christmas decorations! Halfway through October and we’re coming out of ears in Christmas crap already!

Oh yeah, I also just started drum lessons this week. Because life is short, baby, and I’m a housewife! Or rather, I would be more of a housewife if all this work wasn’t coming in. (Damn you, people! Trying to pay me!)

It’s my own fault but I still feel overwhelmed. When slow periods go on too long I get bored and add on new projects. And then I feel too committed to drop them when it gets busy again. (SO type A!) AND I also sometimes put off the things I should be really working on (like writing) and then I put even more pressure on myself to get everything done.

Sometimes I feel like I’m constantly living three months ahead… without ever getting to the end result that I want to happen within three months.

I DO feel really excited about how Halloween is coming, though. Just a bit of fun amidst the bustle. (I’m dressing up. How about you?)

He looks so cute!! WJ's going as Darth Vader - store bought. But I defintely remember the homemade costumes. In fact, my parents shipped us the "old" Halloween costume box a couple years ago. We had a ball trying on the different hats, shirts, ties, glasses and whatever else was in there.

Cuuuute! I love that costume. You're so imaginative, and he looks very happy wearing it.

I love Halloween. Last year was our first Halloween at the new house and of course I did all the holiday crap on my front porch. I haven't had time to do it yet this year. I need to stop going to the theatre and decorate my house instead!

I'm making myself a Halloween costume, as I do every year. This year I will be wearing an Elizabethan man's doublet and hose. Fun, huh?

Hee hee, love the handle at the back of his helmet! I'm guessing it's helpful for guiding the 'robot' where you want him to go? Good thinking.

You did a GREAT job on the Halloween costume! If I send you my kids' measurements, do you think you can whip something up for them? You can just add it to your To Do list.

I think it's really cool that you're taking drum lessons. I cannot play drums to save my life. Just too many body parts going at one time for my tiny brain.

Wow, I almost died of cuteness there!

Lisa, I swiped parts of my parent's "dress up box" when I left home. (bad me) I've been adding to it since. I think all kids (and some adults) should have a costume box.

KC, I hope you post pictures of you in your costume. I'm sure it will come out fabulously, being the sewing wiz you are.

Momma Em, HI! Glad to see you! How is life with a newborn?

You know, the costume wasn't that hard to make (because I am NOT the best sewer). I found some silver 70s pants at a local vintage store and cut off the legs for the material. Then I basically sewed a square tunic. Those "rivets" are scrapbooking bards. Then I spray painted a grey shirt and pair of pants with silver fabric paint (not that you can tell from the photo). And of course, the hat. Gotta love styrofoam, pipe cleaners and glitter glue!

This is only a preview. Your comment has not yet been posted.

The letters and numbers you entered did not match the image. Please try again.

As a final step before posting your comment, enter the letters and numbers you see in the image below. This prevents automated programs from posting comments.

Having trouble reading this image? View an alternate.

(You can use HTML tags like <b> <i> and <ul> to style your text. URLs automatically linked.)

(Name and email address are required. Email address will not be displayed with the comment.)

The Things They Don't Tell You in Lamaze

Writing and Other Loves

My Other Car is Culture Brats